Emerald ash borer (EAB) is a non-native (invasive) insect from Asia that kills ash trees. Across the country, it has killed millions of trees since its discovery in 2002. Minnesota is home to approximately 900 million ash trees, the most of any state, making it very susceptible to the destruction caused by EAB. Trees become infested when adult beetles lay eggs on the bark. The eggs hatch into larvae that bore into the tree, eventually killing it.

EAB was discovered in Minnesota in 2009 in the City of St. Paul. EAB was detected in Monticello in March 2022 by City staff. The City has been working with the State of Minnesota and moving swiftly to manage this insect. Tree inspections began in the northeast section of Monticello on April 4. Inspections will continue throughout the summer; City staff will be marking infected trees with a green 'X' or a green ribbon for either treatment or removal. 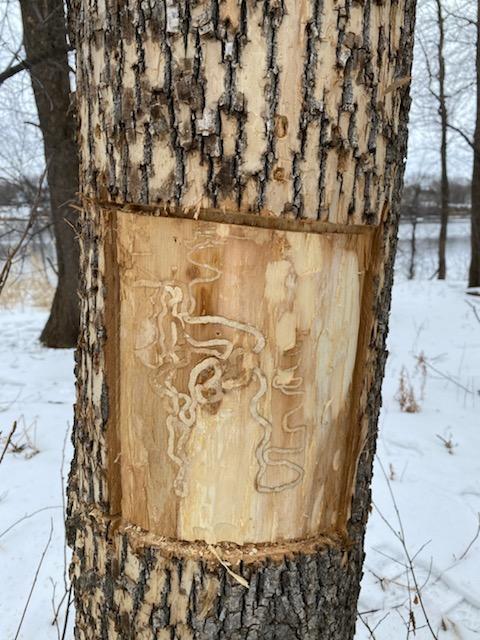 By the time signs and symptoms of EAB are noticeable on ash trees, the larvae have damaged the tree so much so that treatment becomes less effective or is often no longer a viable option for managing the pest.

If you are seeing symptoms and would like to request an inspection of your ash tree, contact the Parks Department at 763-295-2711, or via email Parks.Info@ci.monticello.mn.us. You can also report a diseased tree via our SeeClickFix app.